This morning I attended a Medical Technology Investors conference sponsored by the Massachusetts Medical Device Society (www.massmedic.com) and the keynote speaker was US 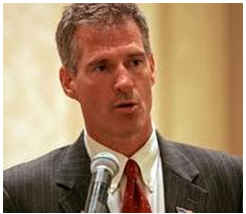 Senator Scott Brown, republican from the state of Massachusetts.  Senator Brown was elected early this year to fill the seat of the late Senator Ted Kennedy.  His address was geared towards medical technology companies, however many of the ideas that he shared are relevant to the home care industry as well.  Below are some of the key takeaways:

On a side note, I think that we’ll be seeing a lot more of Scott Brown.  He seems to be well in touch with the pain that individuals, families, and businesses are facing.  He’s also a handsome guy and a great speaker with a lot of personality and even a good deal of humor in his delivery.   His campaign in Massachusetts was very positive and about helping the people, and he travelled around the state in his pick-up truck (that he pointed out was outside and now has 210,000 miles on it).