The Home Care Software Geek posts in this blog don't talk about Home Care Nursing Software, Private Duty Telephony, DME Delivery Software, Home Infusion Care Management or the other topics we focus on regularly at Ankota.  Instead, these posts are intended to keep our readers up to date with technology trends that might be useful to your agencies, such as social media technologies, mobile devices, and what's happening from the big-boys like Microsoft, Google and Apple

There's an ongoing battle in the cell phone industry to determine the future of smart phones...  Top contenders include iPhone 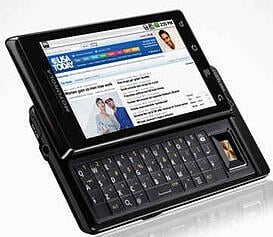 (apple), DROID (google), Blackberry (RIM) and Windows Phone 7 (Microsoft).  I'm going to go out on a limb and predict that DROID (pictured at left) will win (where I define winning as having the largest share of the market - more phones than anyone else).  I'll explain why (below), but first let me take a crack at explaining why this is important:

Why do I predict this?

The "main" smart phone, used primarily by business people in the past few years has been the Blackberry.  It's what I use today and have for 4 years.  The iPhone came out almost two years ago and leapfrogged the Blackberry.  The iPhone had all kinds of apps available (games, health apps, etc.) and offered a significantly richer experience (GPS, graphics and videos, etc.) and bottom line is that it was very cool and very trendy.  More recently the DROID phones came out.  DROID (based on the "Android" operating system by google) isn't quite as intuitive as an iPhone and it isn't inexpensive (yet), nor has it targetted or embraced the business community, so there are numerous reasons on the surface that don't make it sound like the winner, but I'm going out on a limb and predicting that in three years there will be more Android phones than any other kind, here's why:

Pictured below are the iPhone, Windows Phone and Blackberry.