By Ken Accardi27, Feb 2019
We are excited to share that Ankota has launched the Home Care Book Club (click previous link to join) on Goodreads.com! Our Home Care Book Club was created so folks in the home care industry can connect, share ideas, learn Best Practices, and of course, to build community through chatting about books!
More specifically, Ankota CEO, Ken Accardi, will regularly suggest and recap a book for folks to read and to discuss via the Goodreads.com platform.  You can sign up and join the conversation by clicking here.
Please read on to learn about our first book suggestion and recap from Ken: 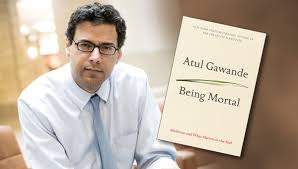 A few year's ago, we announced that Being Mortal, by Atul Gawande was the Ankota Blog's Book of the Year.
The book talks candidly about the end of life experience. It's written from the perspective of a medical doctor who came out of Med School with the attitude that death was the enemy to be defeated and that when someone dies it's a failure. This is likely a typical and shared thought among most young people in the health care profession and maybe even of young people in general.
As anyone ages, we experience the deaths of elderly relatives and people who our family knows, and then we at some point experience the untimely deaths of people in our age group to to accidents or cancer, and mortality becomes more real to us.
But veterans in home care see it regularly. Since we're a home care software vendor, we're not as much on the front lines, but we feel it too.
One thing we do when we're training a customer is to have them configure one of their clients and "practice" using the system (authorization, care plans, clock-ins) with this client (or maybe a handful of clients). As we meet and train we feel like we're getting to know their clients and sometimes they pass and we feel sad.
Your team of course knows them personally. We had a customer who went live on January 1st and we loaded their clients from a data set that was created around Thanksgiving.
In the final go live prep, our customer's lead went through the system and marked a large number of those clients as deceased. She commented "it's one of those times of year when we lose a lot of our oldest and frailest clients." Many of you are reading this and saying, "Of course! Everyone knows that!"  but perhaps we don't.  Reading "Being Mortal" helped me to know a lot more and we thought of the idea of experiencing the book in ore of a collaborative way.
We hope that you join online book club  that you'll join us in this journey.  Please read below for more about Being Mortal and some discussion questions for you to consider:
Being Mortal Chapter 1: The Independent Self
The author, Atul Gawande, is a great story teller. He also happens to be a medical doctor. I first heard of him when I read his book "Complications" where he shares his journey as a medical resident and talks about how making mistakes is a necessary part of really learning to perform medicine. Ho wrote several other books and stories in his column in The New Yorker that have been shared previously on this blog. He always writes in a way that is relevant to people involved in the world of care and people who are not.  He usually has compelling titles for his articles like "Why Doctors Hate Their Computers" and "Is Healthcare a Right."
I give a lecture at MIT and Harvard on Value-Based Care and one of the key readings in preparation is "The Cost Conundrum," which explains how two cities deliver Medicare services to their recipients. city 1, McAllen TX spends twice as much as city 2, Rochester Minnesota but he health outcomes for their patients are much worse.   If his name sounds familiar, it's likely because he was recently named the CEO of the JP Morgan health venture assembled by Amazon.com and Berkshire Hathaway.   Bottom line is I've both enjoyed and learned from everything of his that I've read and I've met him twice (or at least heard him speak).
My intended message in the last paragraph was intended to be "reach the book" instead of just looking at the summary that we write. But having said that, let's summarize a few key points from Chapter 1 of Being Mortal:
Being Mortal Chapter 1 - Discussion
Here are some topics for discussion:
Read on to our synopsis of chapter 2: Things Fall Apart
------

If you'd like to learn more about managing a Home Care business, please download Ankota's free e-Book by clicking the link below: