By Ken Accardi21, May 2019
The following article is part of our online book club series that kicked off with this article here, entitled, "Announcing Ankota's Online Home Care Book Club." Click the link to start from the beginning. 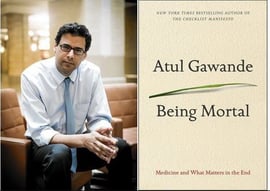 In writing about Chapter 2 and Chapter 3 of Atul Gawande’s Being Mortal I came away with the feeling that neither chapter’s title was appropriate, but chapter 4 got it pretty much right with the title of “Assistance.” If you’ve happened upon this article and would like to go back to the beginning of the Being Mortal book club series, click here.

The home care industry generally serves societies richest and poorest people. The rich prefer staying in the comforts of their own homes and they can afford care. By contrast, the poorer members of society who are eligible for Medicaid are offered home care because it’s more affordable for the state to provide a few hours of care a day than it is to move someone into a nursing home.  In middle class families, the norm is for aging loved ones to move in with their adult children (most frequently with their daughters) when they become unable to care for themselves.

Chapter 4 of Being Mortal tells two stories in parallel. The first is the story of Lou and his daughter Shelley who took in her dad after her mom died and after he experienced some falls. The other story was of an uneducated 21-year-old named Keren Wilson who had a child, was going through a divorce and then suffered a near fatal car accident but then went on to become a Stanford Professor and to invent the Assisted Living Facility in the 1980s.

Lou knew one thing – that he didn’t want to be in a nursing home surrounded by overmedicated people confined to beds and wheelchairs. As we learned in chapter 3, the nursing home concept arose as a means of delivery safety but at the expense of autonomy. His daughter Shelley took Lou in and tried very hard to provide good care for him while also raising her own kids and working. By any measure, she did a great job and Lou was ultimately able to experience a life that he enjoyed. He met some friends who he played cribbage with and Shelley’s dog because a great companion.

Flash over to Keren Wilson. Keren’s mom experienced a debilitating stroke at the young age of 55 and was miserable in nursing homes, inspiring her daughter to try something new. Keren created an assisted living facility with 114 units and built the model in a way that would provide residents with autonomy. If they wanted to stay up all night and sleep the day away, or to drink alcohol that was fine. She received a lot of scrutiny for the model but even though she exited the business in 2000, she believes to this day that it’s a great mode. The chapter goes on to explain how assisted living grew as the largest category of elderly living, but in a lot of cases the facilities that called themselves assisted living were either repainted wings of nursing homes or on the other extreme they were just apartments that didn’t provide the necessary supportive services that the elderly people needed.

In the end, the chapter concludes that as individuals we value autonomy, but for the people we’re responsible for we value safety more. Lou did pretty well with Shelley for quite a long time, but his falls became more frequent and she became less and less able to care for him. He ultimately reluctantly moved to assisted living and finally to a nursing home. The author asked Shelley why she wouldn’t leave him in assisted living where he had made a friend to play cribbage with and go to services, but Shelley chose safety over autonomy.

Read on to Chapter 5: A Better Life

And if you'd like to learn more about managing a Home Care business, please download Ankota's free e-Book by clicking the link below: